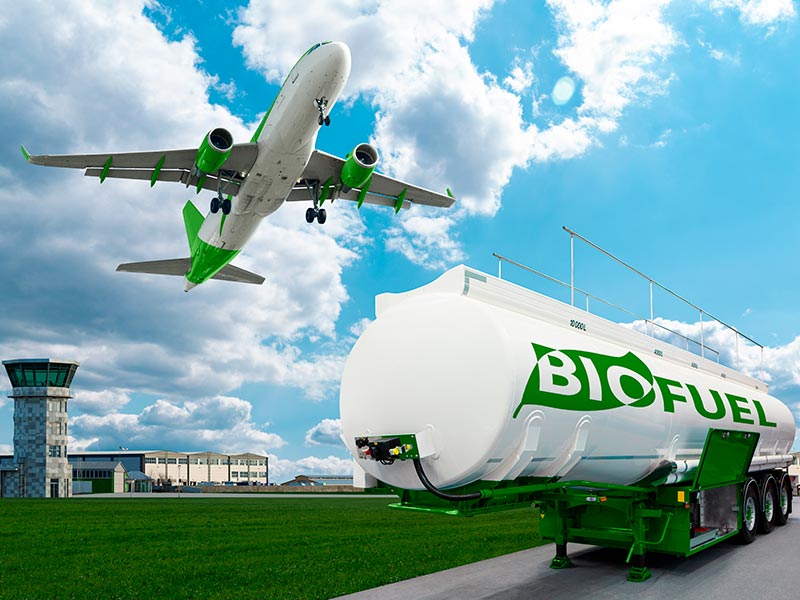 The CO2 emissions from aviation have risen rapidly over the past two decades reaching about 2.8% of global CO2 emissions from fossil fuel combustion and several initiatives are being developed to achieve a sustainable and smart mobility in the transport sector.

Aviation, nevertheless, is one of the most difficult sectors to decarbonize, it has three characteristics that make reducing emissions particularly challenging: unparalleled demand growth, highly competitive market and a very particular set of requirements in terms of high power output and energy-dense fuels.

The first flight with bio jet fuel was made only a little over a decade ago and Sustainable Aviation Fuels (SAFs) just began to gain entry into the commercial market in the past five years. Although there have now been more than 200.000 flights using aviation biofuel blends, the current share of SAFs in jet kerosene for aviation overall is still very small (<0.1%).

The most commercially viable SAFs are substantially more expensive than oil-derived jet kerosene. Since airlines compete on a thin profit margins, there is a need for policies to support SAF consumption in order to push the demand growth that will realize economies of scale in production. The policies should provide certainty for direct investments at the various early stages of development, for technologies and RD&I, while also ensuring secure and steadily growing demand from airlines.

As part of the efforts to scale up the development of SAFs and the possibility to commercialize it at a competitive cost and in a truly low-carbon manner, in February 2020, six bio jet fuel production pathways had been approved by the American Society oil Testing and Materials (ASTM) standard D7566, the fuel required for international flights. Of these, only one – HEFA jet – is commercially available.

In 2019, United Airlines agreed to purchase up to 10 million gallons (37.85 million liters) of SAF in the next two years. Air France-KLM pledged to blend SAF into its flights from San Francisco International Airport, and Scandinavian Airlines (SAS) has pledged to run all domestic flights (less than 20% of their overall fuel demand) on SAFs by 2030.

In addition to these airlines, Lufthansa, FinnAir, Virgin Atlantic, Virgin Australia, Azul, British Airways and KLM have also flown flights on biofuels, and many have made pledges to scale up their use in the near future.

A relevant number of means are already in place in Europe to support the deployment of sustainable aviation fuels, being the HIGFLY project a pertinent initiative towards this objective.

We are professional and reliable provider since we offer customers the most powerful and beautiful themes. Besides, we always catch the latest technology and adapt to follow world’s new trends to deliver the best themes to the market.